If you think hybrid integrations on the Azure cloud are a heck of a task, you’re wrong.

As recently as a few years ago, tech leaders and developers viewed Microsoft Azure cloud as a limited solution, appropriate only for cloud-based workflows and automations. On the other hand, existing hybrid integration services such as Anthos or Mulesoft cost more than tech executives can justify.

By increasingly blending applications on cloud and on-premises into automated hybrid cloud configurations, IT leaders can prevent disruption from meeting sensitive and mission-critical applications. All this with Azure Logic Apps and Azure Functions. Let’s know their features.

While there is some overlap between the features of Azure Logic Apps and Azure Functions, they are two different event-driven Azure services that can be used for hybrid integrations.

With this host of Azure’s serverless PaaS offerings, developers can create a core integration engine-orchestration system that can handle real-time application integration consuming microservices at scale.

By now, our experience dealing with hybrid integrations between applications on the basis of logical reasoning have shown that, irrespective of the platform or workload nature, complex functions can be performed and that, depending on the requirements, a series of events can be triggered based on the outputs. All this using Azure Logic Apps and Azure Functions. Let’s know how they work.

Call Azure functions from Logic Apps or vice versa, a certain piece of serverless computing code can be run as a function between logically integrated applications.

In a banking scenario, the customer data is to be updated, nurtured and scheduled for personalised offers. On the Microsoft Azure platform, this represents a clear case of logical integration between 3 applications: marketing platform, CRM and sales hub. 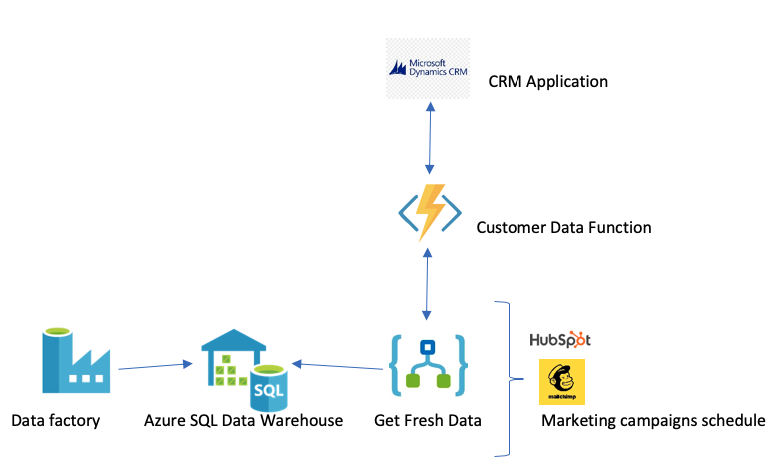 In the above example, the current customer data from Azure Data Factory is transmitted through Azure SQL Data Warehouse for a new query. Next, fresh data is acquired through an integration using Azure Logic Apps that connects with a Customer Data Azure function to compute resources inherited from the leading CRM platform Microsoft Dynamics. Finally, when the workflow is executed, the data is updated in the repository and categorized in the Azure Logic Apps for future marketing campaigns.

In a similar manner, an application integration practice allowed a bank to save 15% effort hours on manual workflows and discovered new avenues of real-time customer data. Further, the bank has already integrated machine learning resources to the same workflow for personalising offers customer loyalty programs. 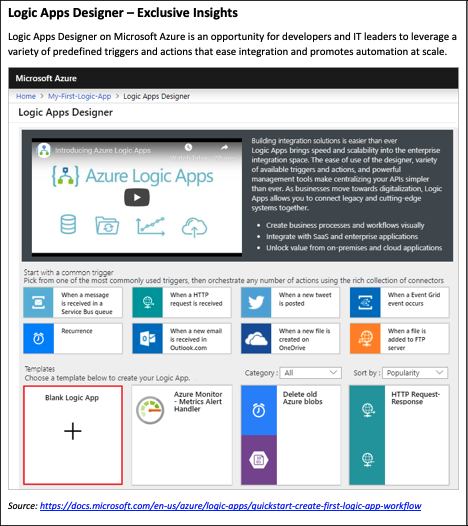 The use of Azure Logic Apps in combination with Azure functions is not defined by bounds of workloads or platforms. Thus, the resulting integrations can be hybrid across all levels of enterprise information. Cloud natives, for instance, have been able to automate multiple core operations in product development and service delivery.

Examples of IT cases with Azure Logic Apps and Azure functions

This list of use cases is drawn on our experience working on end-to-end cloud modernization projects. We have learnt and compiled such cases of hybrid cloud enablement using Azure Logic Apps and Azure functions that take business innovation to the next step.

Need help with azure or Dynamics 365?

Get in touch with us if you want to get more details and help with hybrid integration using Azure Logic Apps and Azure functions.

Rokhri Ltd is a midland based software consultancy offering CRM and ERP solutions to small , medium and large size of organisations.

We have successfully delivered several projects and migrated organisations from legacy systems to Microsoft Dynamics platform.

Plugin Development
100%
Workflows
100%
Web Portals
100%
Integration
100%
We use cookies to ensure that we give you the best experience on our website. If you continue to use this site we will assume that you are happy with it.Ok